Fourth Time is the Charm: Successive §2241 petition may succeed in overturning a twenty-year old conviction 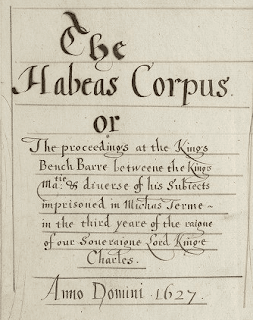 Judge Bibas, writing for a panel including Judges Restrepo and Porter, penned an opinion holding that a defendant’s challenge to his twenty-year old conviction for violating 18 U.S.C. §924(c) not only could go forward, but on remand should probably be granted. Congratulations to James Feldman for a well-plotted appeal.

In 1999 Holland was charged with (1) manufacturing, possessing, (2) distributing cocaine; conspiring to do the same; (3) using a gun to murder someone during those crimes;  and (4) of violating 18 U.S.C. §924(c) by use of a firearm in relations to a drug trafficking crime and aiding and abetting that crime. The latter charge was based on Holland’s accepting an offer to purchase a gun from one of his customers for drugs and money. About seven years after Holland’s conviction, following the publication of Watson v. United States, 552 U.S. 74, 83 (2007), that trade was no longer considered a crime.

Prior to 2007, Holland unsuccessfully challenged his conviction on direct appeal and in a 28 U.S.C. §2255 petition. After Watson he filed a petition under 28 U.S.C. §2241, but the District Court said he should have filed under §2255, and in any event, his petition was untimely. He filed two more petitions under §2241 raising actual innocence, but they were dismissed too, All the dismissals were affirmed by the Third Circuit. His fourth §2241 petition is the one that formed the basis for this opinion. Neither the Government nor the District Court treated it as successive, and the District Court further found that “a §2255 motion would be ‘inadequate or ineffective’ to test the legality of Holland’s detention.” Still the District Court denied the motion because even if Holland did not use the gun in the transaction, the person he bought it from did by trading it for drugs, and Holland aided and abetted the transaction. Holland appealed.

The panel first found it had jurisdiction to hear the matter under §2255(e)’s savings clause, which allows a §2241 petition when a §2255 petition would be "inadequate or ineffective to test the legality of [the petitioner’s] detention." Though the AEDPA and “the equitable abuse-of-the-writ doctrine limit second or successive petitions,” that law and the history of habeas corpus does not treat those limits as jurisdictional. The Court can choose to hear them, especially when, as in this case, the Government did not raise the bar on successive habeas petitions in the District Court. “[L]imits on successive §2241 petitions are discretionary and equitable—not mandatory and jurisdictional,” Judge Bibas wrote.

Next the panel found insufficient proof the purchaser of the drugs violated §924(c). Buying dugs for personal with a gun does not violate §924(c) if it does not aid felonious drug trafficking activity— the purchaser’s crime might only have been a misdemeanor, and if so, Holland was not “aiding and abetting” a felony. (The opinion noted a Further, on the record before the panel, Holland’s possessing the gun at some point in the transaction was not use of the gun in furtherance of the felony. Holland was convicted solely on evidence of using the gun at the end of the transaction, not using it during and in relation to drug trafficking crime. His conviction was not based on his possession of it. (The opinion notes a Circuit split on the issue of whether possession of a gun under these circumstances violates §924(c), but did not address it, as Holland was not convicted on the basis of possession.)

In the end, the panel remanded the matter to the district court for a further inquiry into whether the person who purchased the drugs with the gun violated §924(c). This summary by the way, does not do justice to Judge Bibas’ compact and well-written opinion. It deserves a read.

The defendant in United States v. Kirschner,  __ F.3d __, 2021 WL 1570250 (3d Cir. April 22, 2021), imported counterfeit coins and bullion and then, posing as a federal law enforcement agent, sold them as genuine articles to unsuspecting customers. While most of the counterfeit coins and bars were common collector items, priced at approximately $100 each, a small minority of the coins were counterfeits of exceptionally rare coins. Despite the extreme rarity of the coins, the government attempted to estimate the fair market value of the rare coins as it had the fair market value of the common collector coins. The government estimated that the intended loss of the rare coins accounted for approximately 97 percent of the total estimated intended loss.

On appeal, Kirschner argued that the district court never found that he purposely sought to inflict the losses the government argued he intended to inflict on the rare coins because he never had access to the markets presupposed by the government's fair market value methodology, i.e., ultra-wealthy collectors like King Farouk of Egypt, never attempted to access such markets, had no knowledge of the prices for which genuine versions of the rare coins had sold, and never would have attempted to sell the coins at those prices.

The Third Circuit agreed. While the district court focused on what Kirschner intended to do with the rare coin counterfeits, it never found Kirschner intended to sell the rare coin counterfeits for the prices the government claimed. The principal question for the Third Circuit was not whether Kirschner could have sold the high-value counterfeits at the prices claimed by the government. The question is whether he intended to. Indeed, the District Court admitted that it did not know “[w]hat [Kirschner] intended to do specifically, logistically, with these valuable coins,” only that, “by a preponderance of the evidence, at some point he was going to try to sell those coins as legitimate coins.”

The Third Circuit held that, in order to estimate the losses a defendant intended to cause his victims under U.S.S.G. § 2B1.1 cmt. n.3(C), a district court must conduct a “deeper analysis” to make sure the defendant purposely sought to inflict each component of the losses the government claims he intended to inflict. In conducting that analysis, the court is free to make reasonable inferences about the defendant's mental state from the available facts. The government need only prove a defendant's intent by a preponderance of the evidence, and the court need only make a “reasonable estimate” of the intended loss. If the losses associated with the defendant's past conduct are easily extrapolated to losses the defendant intended to cause in the future (as in stealing credit cards and charging the same amount on each before discarding), the district court is free to estimate intended losses using one governing methodology (say, number of stolen but unused cards times dollar amount charged on used and discarded cards). But if the losses associated with the defendant's past conduct do not neatly map to intended future losses, the district court must finely tune its methodology to ensure it does not underestimate or overestimate a defendant's intended losses. Accordingly, the Third Circuit vacated Kirschner's sentence and remanded for reconsideration of the intended loss.

Kirschner also challenged two other enhancements, for abuse of position of trust and sophisticated means. The Third Circuit rejected both challenges. First, the Court found that Kirschner's impersonation of federal law enforcement officer played a significant role in execution of his scheme, for purpose of application of abuse-of-trust enhancement, since impersonation protected his counterfeits or money earned from them from robbery. Second, the Court found that Kirschner's offense level could be increased for use of sophisticated means because although Kirschner did not create counterfeits he sold or intricate packaging in which he sold them and his conduct could have been more sophisticated, he deployed various other strategies to conceal his fraud by using pseudonym to conceal his identity, and he created fake businesses, social media accounts, and sale invoices to give his scheme veneer of legitimacy and played major roles in commission and concealment of his crimes

** Note: The Third Circuit noted that only Application Note 3(A) to §2B1.1, not the Guidelines' text, says that defendants can be sentenced based on the losses they intended. By interpreting “loss” to mean intended loss, it is possible that the commentary “sweeps more broadly than the plain text of the Guideline.” United States v. Nasir, 982 F.3d 144, 177 (3d Cir. 2020) (en banc) (Bibas, J., concurring). However, Kirschner assumed the comment was correct, so the Circuit did too.

Reminding a sentencing court that the §3553(a) factors are important, having the defendant request probation and even making a proportionality argument may breach a provision of a plea agreement prohibiting a party from requesting departures or variances below the guideline range.

The Third Circuit found defendants breached the terms of their plea agreements and vacated the sentences in United States v. Yusuf and United States v. Campbell, 993 F.3d 167 (3d 2021).  These cases involved plea agreements that prohibited either party from seeking departures or variances.  The defense in these two cases made very different sentencing arguments that the government argued violated that provision of the plea agreement.  Both defendants received below guideline range sentences and the government appealed.

Appellant Campbell was charged with being a felon in possession of a firearm in violation of 18 U.S.C. 922(g), after a gun was discovered in his car following a traffic stop.  Despite agreeing not to request any departures or variances, defense counsel reminded the court of the importance of §3553(a) factors, that the guidelines were only a “starting point,” and further submitted letters of support asking for leniency.  When Appellant addressed the court, he asked for a probationary sentence.  The government objected to these arguments.  Nevertheless, the District Court granted a very significant variance, sentencing Campbell to only a third of the time calculated in the guideline range. On appeal, the Third Circuit ruled that Campbell’s request for a non-custodial sentence, after being prompted by his attorney, was an explicit request for a below the guideline sentence in violation of the plea agreement.  The circuit court further held that nothing in Federal Rule of Criminal Procedure 32(i) allows a defendant to ask the court to apply the §3553(a) factors when the plea agreement clearly prohibits the parties from seeking variances.  The sentence was vacated, and the case remanded.

Lastly, Campbell also appealed the denial of his motion to suppress the weapon found in his car during the traffic stop.  Campbell was pulled over because his license plates were partially obscured.  Also, after police ran the plates, they discovered he was driving with a suspended license.  During the stop, the officer thought he saw a gun while Campbell was looking for his registration and a current insurance card.  After suggesting he look in the central console, the officer confirmed his suspicions and then spotted another gun when Campbell opened the glove compartment.  The Third Circuit rejected Campbell’s argument that the officer unconstitutionally prolonged the stop, noting that only five minutes transpired between the time Campbell was pulled over to the time he was arrested.  Moreover, the officer suggesting Campbell look in the central console for the insurance card was a valid request during a traffic stop.