Defendant Not Eligible for Sentence Reduction under 18 U.S.C. § 3582(c)(2) When Sentenced Under Career Offender Guidelines

In both Barney and Flemming, the defendants had been convicted of possession with intent to distribute crack cocaine. Both defendants had been sentenced as career offenders, but both of them had received downward departures pursuant to U.S.S.G. § 4A1.3 (overstatement of criminal history). The § 4A1.3 departures reduced the defendants' sentences to the ranges which had been calculated before the career offender enhancements had been applied. Both defendants sought further sentence reductions under 18 U.S.C. § 3582(c)(2), arguing that Amendment 706 to the guidelines would have reduced their base offense levels.

However, in Flemming, the defendant had been sentenced under the 2001 version of the guidelines. The Flemming court determined that, prior to a 2003 amendment, the guidelines addressing the defendant's eligibility for an additional sentence reduction under 18 U.S.C. § 3582(c)(2) were ambiguous. Specifically, the Court concluded that the 2001 version of the guidelines failed to adequately define the term "applicable guideline range" as used in 18 U.S.C.
§ 3582(c)(2). The Court noted that the 2003 amendment clarified the definition of "departure" in the commentary to U.S.S.G. § 1B1.1 to indicate that a departure under § 4A1.3 was a departure from the applicable guideline range, not a departure to that range. However, this amendment was enacted after the defendant already had been sentenced. Therefore, the Court in Flemming specifically declined to address the issue of whether the defendant's "applicable guideline range" under 18 U.S.C. § 3582(c)(2) was calculated under the career offender guidelines or guidelines for crack cocaine. Nonetheless, the Court relied upon the rule of lenity to grant the defendant's request for the additional reduction.

Note that, although the Court has not directly addressed application of 18 U.S.C. § 3582(c)(2) to career offenders under the recent amendment to § 1B1.10 (Amendment 759, effective November 1, 2011), it suggested in a footnote that its conclusion is consistent with the new language in this amendment.
By Angela Haynes at March 27, 2012 No comments:

A recent post brought your attention to a newly released study from the Transactional Records Access Clearinghouse of Syracuse University ("TRAC Study") which has garnered much attention in its efforts to compare sentencing disparities between Federal District Courts and Judges.

A review of the TRAC study, however, raises serious questions about its validity. A fact sheet (available here on Berman's Blog) prepared by Michael Nachmanoff of the Eastern District of Virginia, identifies some very substantial problems with TRAC's methodology. Here is one: "The only similarity among the cases sentenced in each district is that prosecutors categorized them as 'drug,' 'white collar,' etc. All other case differences are ignored. Heroin or marijuana cases, involving 1 gram or 1 ton, are all called 'similar' drug cases. First-time offenders are lumped with lifetime criminals. Academic researchers studying disparity use data from the U. S. Sentencing Commission to categorize cases along dozens of different variables, but this data was not used in TRAC’s analysis."

Given these issues, counsel will want to be alert and wary of any efforts to use or take consideration of the TRAC study at sentencings.

In United States v. Moyer, 2012 WL 639277 (Feb. 29, 2012), Police Officer defendants were charged with covering up a racially-motivated and fatal assault committed by local teenagers. The charges included conspiring to falsify documents with intent to obstruct investigation of a matter within the jurisdiction of an agency of the United States, (18 U.S.C. § 371), and falsifying documents (18 U.S.C. § 1519). Defendant Moyer was also charged with two counts of obstruction of justice (18 U.S.C. § 1512) and one count of making false statements (18 U.S.C. § 1001).

Defendant Nestor (the Chief of Police), moved to dismiss the conspiracy and falsifying document counts and also moved for a bill of particulars seeking (1) the agency and matter within the federal government's jurisdiction and (2) the reports alleged to be false. The District Court denied the motion to dismiss and granted the bill of particulars with respect to the “federal investigation or matter under the jurisdiction” of the United States. The court denied the request with respect to the specific statements or reports being charged, concluding that the indictment was sufficiently specific. The government responded by informing Nestor that the matter within the FBI's jurisdiction was the racially motivated killing. Following a jury trial, defendant Nester was found guilty of the single count of falsifying documents and defendant Moyer of a single count of false statements.

On appeal, Nestor asserted that the district court erred in denying (in part) the bill of particulars with respect to the falsifying documents count, failing to dismiss the count as duplicitous, and failing to enforce the bill of particulars it did order. The Circuit disagreed, first concluding that the indictment was sufficiently detailed such that the bill of particulars was unnecessary. In addition to setting forth the elements of the statute, the indictment, explained that the falsified documents were “official police reports” created between July 12, 2008, and March 30, 2009, and incorporated further specific details outlined in the conspiracy count. The indictment thus met the standard of being concise and containing “essential facts,” even if it did not identify every alleged false fact or omission. The Court also rejected Nestor’s claim that the district court failed to properly enforce the portion of the bill of particulars it did order, regarding the agency and the matter within federal jurisdiction. The government’s response – that “the matter within the jurisdiction of the [FBI was] the racially motivated killing of” the victim, Ramirez – was not inadequate and failure to cite the specific statute was of “no consequence.”

The Court next held that the count was not duplicitous (joining of multiple offenses in a single count). It held that the allowable unit of prosecution under § 1519, which charges in part: “Whoever knowingly alters, . . . falsifies, or makes a false entry in any record, document, or tangible object with the intent to impede, obstruct . . .” is controlled by the use of the terms “any”and “record,” which can fairly signify multiple statements or reports. The Court also rejected Nestor’s claim that the juror’s may have relied on different acts, as the count read to charge a single scheme.

The Court next rejected Nestor’s sufficiency and vagueness claims, declining to read a knowledge element into the matter being within the jurisdiction of the FBI, or any requirement of “contemplation of” or a nexus to a specific investigation.

Finally, the Court rejected defendant Moyer’s sufficiency challenge to his material false statement conviction, which was based on statements to the FBI falsely indicating he had been told by a witness of another person with a gun (not the teens invovled) alleged to be present at the incident and that the same witness had not identified anyone involved in the assault.
By Christy Unger at March 08, 2012 No comments:

In United States v. Saferstein, 2012 WL 234408 (Jan. 26, 2012) (published Feb. 24, 2012), the Circuit held that (1) a District court's misstatement during the plea colloquy describing an appellate waiver more narrowly than provided by the plea agreement, had effect of narrowing the waiver; (2) retrospective application of a new guideline provision violates the Ex Post Facto Clause notwithstanding Guidelines' advisory character; and (3) “one-book rule” did not apply when doing so violated the Ex Post Fact Clause.

Saferstein pled guilty to one count of mail fraud, one count of wire fraud, and two counts of submitting false tax returns, based on his fraudulent operation of a telemarketing company over a period of seven years.

The Third Circuit held that the court’s statement during the colloquy created ambiguity which did not exist in the plain text of the plea agreement. Given that ambiguity and that plea agreements must be construed to protect the defendant as the weaker bargaining party, the Court found that the waiver must be construed narrowly, permitting Saferstein to raise constitutional claims on appeal.

The constitutional issue Saferstein raised was an ex post facto claim. Saferstein claimed that his sentencing, which was based on the 2009 Guidelines Manual, violated the ex post facto clause because the mail and wire fraud counts occurred in December 2002 and June 2003, and the base offense level for fraud under the Guidelines was increased on November 1, 2003. Both counts for submitting false tax returns occurred after that date.

According to the one-book rule, when a “defendant is convicted of two offenses, the first committed before, and the second after, a revised edition of the Guidelines Manual became effective, the revised edition of the Guidelines Manual is to be applied to both offenses.” § 1B1.11(b)(3). However, in United States v. Bertoli, 40 F.3d 1384, 1405 (3d Cir.1994), the Court previously held that the ex post facto clause requires that a sentencing court apply the Guidelines Manual in effect at the time the offense was committed if retroactive application of the later Manual would result in harsher penalties, even if the counts are grouped (but noting “ex post facto concerns are assuaged when counts are properly grouped under § 3D1.2(d) as ‘continuing, related conduct’”).

In this case, the sentencing court applied the Guidelines in effect when the false tax returns were submitted to the IRS, even though those counts were not grouped with the mail and wire fraud counts. As a result, application of the later edition of the Guidelines violated the ex post facto clause.
By Christy Unger at March 06, 2012 No comments:

Post-Hoc Testimony Re Tint Not Basis for Reasonable Suspicion; Tip About Firearms in Car Not Sufficient

In United States v. Lewis, 2012 WL 556065 (Feb. 22, 2012), a reasonable suspicion / traffic stop case, the Circuit held: (1) that testimony regarding the illegal tint on the windows of defendant's vehicle did not provide non-testifying police officer reasonable suspicion to justify a traffic stop, as there was no evidence that the officer observed a traffic violation arising from tint prior to initiating stop; and (2) a tip from a known source that there were firearms in a white vehicle with the numbers 181 in the license plate did not provide the police officer reasonable suspicion of criminal activity necessary to justify an automobile stop. The tip did not include any information as to whether possession of firearms was illegal or whether they were being used in a criminal manner. (Note: Virgin Islands case, not unlawful to possess firearm).
By Christy Unger at March 06, 2012 1 comment: 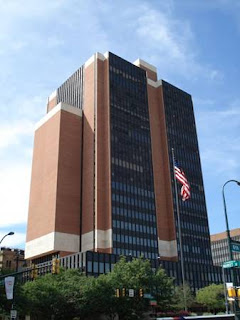 TheTransactional Records Access Clearinghouse of Syracuse University has released a study thatamong other things compares sentencing disparities between Federal DistrictCourts and Judges. Partsof the report made public note that the Eastern District of Pennsylvania is oneof the districts with the ten highest disparities in drug sentencing. (Fourdistricts shared the Eastern District’s ranking.) Studies of individual judges’sentencing patterns are available on a subscriptionbasis. The parts of the study that areavailable to the general public are short and best read in full, but today’s NewYork Times has a good story about it. The public site about the study andthe Times’ story (both of which are not too long) require careful reading, asthe study has its limitations, but they make interesting reading nonetheless.

Image from Constructonomics.
By Stuart Wilder at March 06, 2012